Curse of the Ferryman: 2

2. The Madness of Lorne

Lorne, the Lord of Limmon, bristled in his fur cloak in the chamber of his tower.

‘The ferryman has cursed me,’ he snarled. ‘I may not sleep till one soul has thanked me for a thing I have done.’ 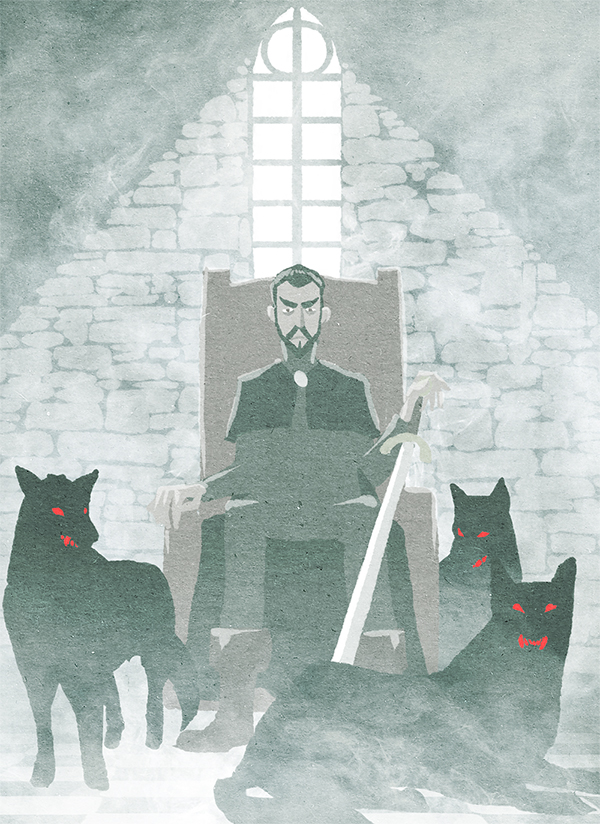 His sons were cruel men. One said, ‘Bring out the dogs. We shall hunt the ferryman again.’

‘The ferryman is drowned.’ said the second. ‘Let us burn his hut instead.’

‘Why burn the hut of a dead man?’ said the third. ‘But he has a daughter. Let us hunt her.’

Lorne hugged his furs around him. ‘Do as you wish, to man or beast,’ he said. ‘But if you touch that child you will suffer worse than I.’

His sons scowled and left him.

He had become thin and hollow-eyed
He gave up hunting men for sport. He ordered that a bridge should be built where the ferryman had died, so that the people could cross the river again and perhaps thank him for that. He came down to see the work done.

Lily, the ferryman’s daughter, watched him from her door. If he had not been a big man, a head taller than anyone else in the glen, she would not have known him, for he had become thin and hollow-eyed from lack of sleep.

When he saw her, Lorne looked down as if he were ashamed.

The night the bridge was finished, the river rose in flood and carried it away.

He built a church beside the stream, but the river rose and destroyed that too.

In the end he said that there should be a new ferry, and he bought a new boat and paid a man to pole it. He hung a new bell by the ruins of the bridge, so that travelers could call the ferryman if he was on the other side.

But no good man would work for the Lord of Limmon now. The new ferryman was so lazy that he would leave his boat and lie drunk in the ditch. No one thanked Lorne for that. 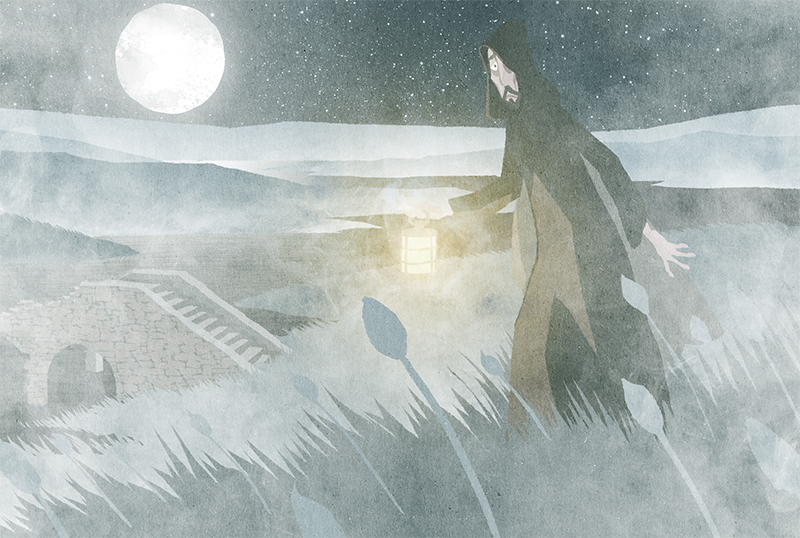 He wandered the banks at night, wrapped in a ragged cloak and hood. Lily would see his lantern-light wavering above the reeds.  She heard him calling to her dead father to release him.

He seemed as terrible and cruel as ever. She hated and feared him. But there was something sad about him too, as if he were a wild beast that had been wounded in a trap, and the wound was slowly killing him.

Even in death he could not sleep
One night she heard him again, crying like a man who had gone mad. Towards dawn his voice faded into the hissing of the reeds. Lily rose, wrapped a blanket her shoulders, and went out just as she had when her father had died.

She found the Lord of Limmon’s body lying half in and half out of the water. His eyes were open, as if even in death he could not sleep.

Out of the reeds rode the eldest son of Lorne. He saw his father dead on the riverbank and the daughter of the ferryman kneeling beside him.

Cold rage filled his heart. He seized Lily, put her over his horse and rode with her to Tower Limmon. There he flung her into the dungeon and went to his brothers.

‘Father said we should not touch her,’ said the second son.

‘Father is dead,’ replied the first. ‘And there is no one else to bear our revenge!’

They looked to the third son, who was the cruellest of them all. He smiled a slow, thin smile and stroked his cheek with the tip of his finger.

‘Starve the dogs,’ he said softly. ‘Let us see how she runs.’

Run, Lily!
Run, Lily, run! In the darkness she stumbles down the hill. She can hear the dogs howling as they stream out from the tower. She runs as fast as she can. But she is so weak after days in the dungeon without food.

She must run, or they will trap her against the river, and then she will have to drown like her father or be torn to pieces by the pack. What has she done to deserve a death like this?

Run Lily! Don’t stop, don’t turn! Her lungs are gasping, her legs are shaking. She stumbles among the mists on the banks of the Limmon. She can hear the river to her left and the dogs baying close behind.

Hooves gallop over the wet ground to her right. The black shape of a horseman rears suddenly ahead, reining in his steed under the moon. 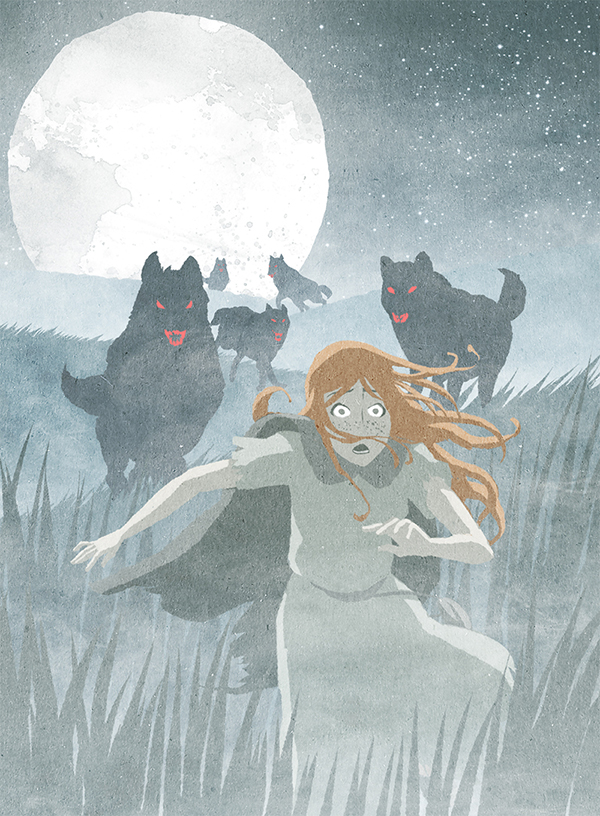