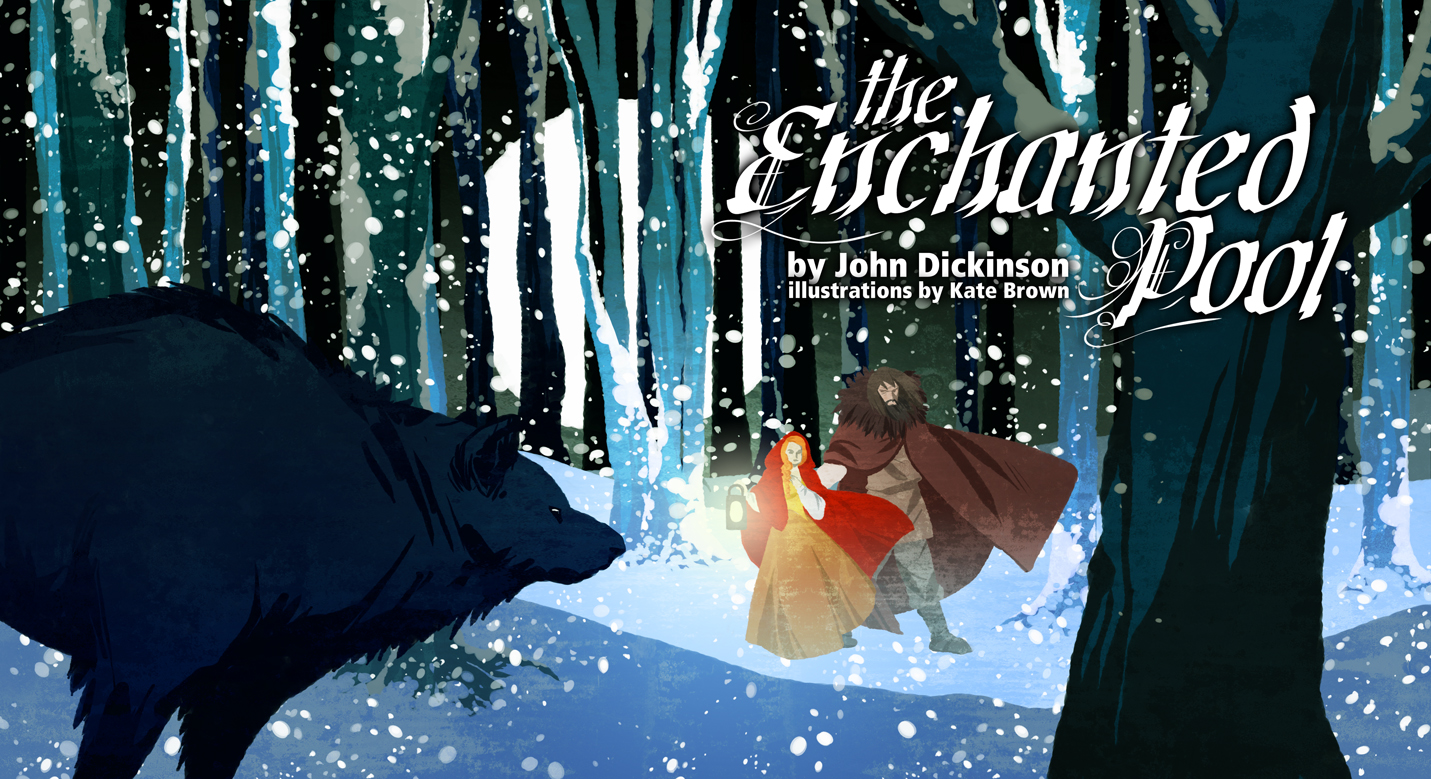 Lis wanted to marry, but she was too clever and cross for the village boys. So she went up the snowy mountain to scream about it. Her father followed. Just in case…

‘Wolf,’ he said, as he caught up. ‘Look.’ A shadow slipped through the thickets.

‘I have my knife. You have yours. If he’s wise he’ll keep away.’

So Lis turned her back. She screamed, and the peaks flung back her cries.

‘I feel thirsty, said Lis, whose throat was sore.

‘There’s water here.’ A little stream was trickling out from some rocks into a small pool. Lis drank. It was very cold.

‘Someone’s tried to block it up, look.’ Her father pointed to crumbled mortar and stones that had fallen out of place. ‘Strange thing to do. A spring will always find its way out.’

He started down the hill. Lis watched the thickets and listened to the water. Then she followed.

Moments later, running down the path behind her, wearing nothing but his bare skin, came a young man. His face was white and his hair grey, and he gasped with the cold. Lis didn’t shriek or scream. She whipped her cloak round him so that he would not freeze.

‘Where did he come from? said her father.

“I have my knife. You have yours. If he’s wise he’ll keep away.”

The young man could not speak to begin with, and when he started using words, he couldn’t tell them who he was or where he came from. He just waved his hand and the woods. Lis called him Luth. He seemed happy to be with her. His eyes followed wherever she went. Lis laughed and she sang, and when her friends ask what had happened to her, she said, ‘Love changes you.’

The other girls thought Luth very handsome. Many went up into the woods, hoping they too would find love there. Of course the village boys followed them. And when they came down, some did decide to marry. By the summer there were lots of picnics by the pool.

‘Oh, what a beautiful stag!’ said a girl called Dana. She had reached the pool first and surprised him there. 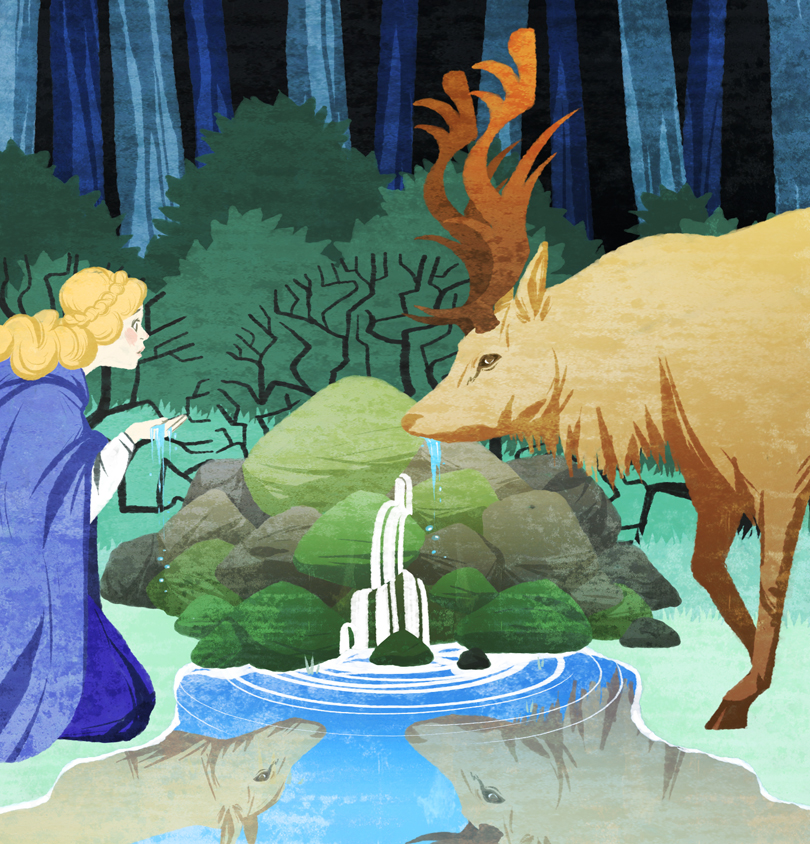 He was rough and ruddy, with horns like a tree. He lifted his head from the water as she approached. The sound of her friends rose from the path , laughing as they climbed. The stag slipped away. Sadly Dana watched him go. Then she too stooped to drink.

It was not until the end of the picnic that the others missed her. They asked who had seen her last. They searched the woods but saw only a stag and his doe, trotting together through the glades.

Her friends asked what had happened. She said, “Love changes you.”

Whenever she could, Lis climbed the mountain to search for Dana, because they had been friends.

One autumn evening, as she rested by the pool, she saw a thrush fly down to drink. Then a marten came slipping through the grasses. The thrush started into the air. The marten sniffed, looked around, and it too lowered its head to the water. And disappeared.

In a whirr of wings a second thrush rose from the pool-side. It circled the first, chirruping until both were lost in the branches. But in the thickness of the air Lis thought their cries sounded like screams. 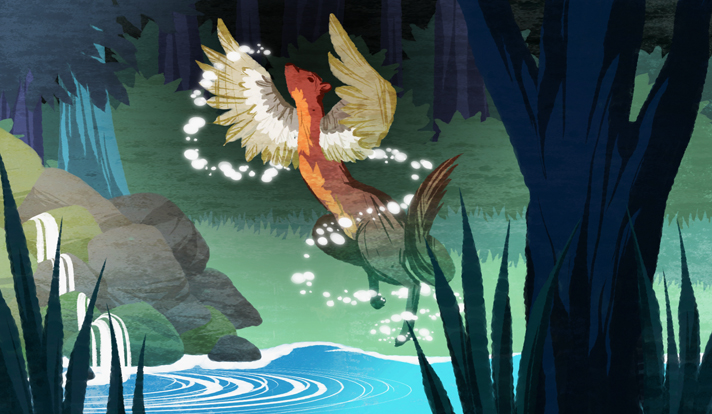 Back in the village Lis spoke angrily to her father. She bolted her hut door so that Luth could not come in, though he lay in the porch and whined horribly. That night the first snows fell.

In the morning she found Luth still lying at her door, shaking with cold. She looked at him with blank eyes. Then she gave him a heavy sack and said, ‘Come.’

Her father saw them leave. He sucked on his pipe. He rose to follow.

The tracks of Lis and Luth led upwards, side by side in the snow. When he glimpsed her through the branches there was only Lis, walking alone. She was carrying the sack now.

He found Luth lying in a drift.

Luth’s face was white. His fingers clutched the stab-wound in his ribs, from which his blood flowed fast, red over his arm, dark on his clothes and black where it stained the snow. His tongue lolled between his lips. ‘She knew,’ he gasped. ‘She knew!’

His body shrank. His face drew into a long grin. Grey hairs appeared all over it. Then there was no man, but only a wolf, dead in a bundle of bloody rags.

Lis was kneeling by the pool. She had laid her knife on the grass and was blocking up the crack in the rocks from which the spring flowed, using stones and mortar she had taken from her sack.

‘This water makes us fall in love,’ she sighed. ‘Even when we shouldn’t. It makes people fall in love with beasts. ‘

‘The stream will come out again,’ her father said.

‘Maybe somewhere else, where no one will find it.’

The water had washed the blood from her hands, but not the tears from her face or the pain from her heart. ‘One day he would have forgotten that he loved me. He would have looked at me and remembered only that he was a beast.’

Slowly her father nodded. ‘That was wise. Your mother would have said so.’ 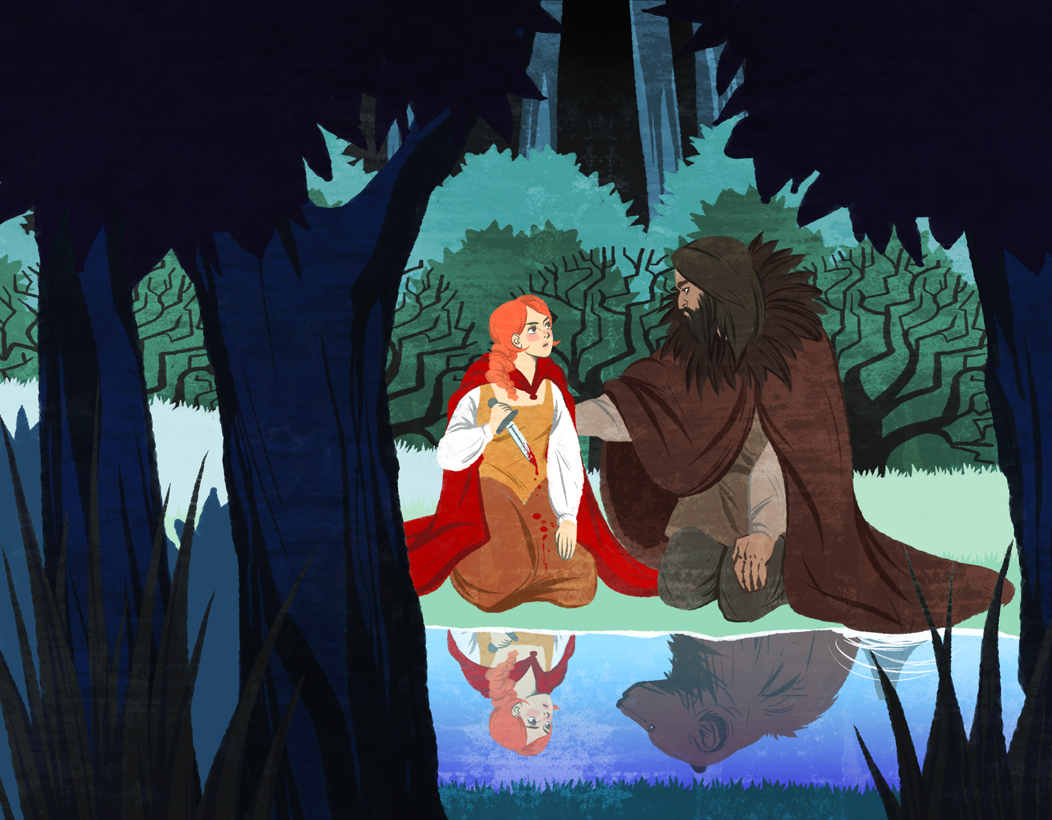