What IS a story?

Let’s go back to that first film:  Here it is.  (You might have to skip an ad or two, but the film itself lasts only a couple of seconds).  Is it a story? Not really – you get a glimpse of several people walking around, and that’s all.  Nothing else happens. There’s no chance to learn anything about them.  Not every film’s a story.

Not everything written is a story either.  Here’s an organ donor card.  It’s got those words ‘Yes I donate’ written on them, but who is ‘I’? And why do I donate? There might be a story behind those words, but they aren’t in the words themselves. 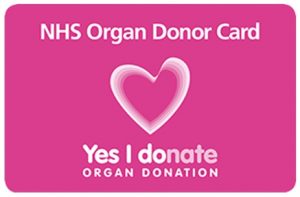 Suppose one of those characters in the garden had stopped, bent down and picked up an organ donor card that had been lying on the ground, would that have made it a story? Maybe it does. Something has happened anyway. But I think we need a little bit more.

Suppose that they turn over the donor card and give a start of surprise, because there, written on the back of the card, are the words, “Help! I am being held prisoner in the hospital!” Now we are into a story. It’s not just that we have a sequence of events. It’s that we’ve started to imagine ourselves into what’s happening.  We share the surprise of the garden people. And we want to want to know what comes next.  We’ve started to will the characters to jump onto their penny-farthing bicycles and pedal off to the hospital as fast as they can to find out who it is that’s being held and why.

Stories don’t have to be imaginary. Many a newspaper sells itself by publishing stories that are true, or at least that are presented as true. True or not, they call us to imagine for ourselves what happened. Pickling two off today’s BBC website, I have “DRAMA AND EMOTION AS MORGAN WINS BRONZE” and “SHOULD BRITS EAT MORE BRITISH SEAFOOD?” The first is clearly a story. The second doesn’t look like it’s a story at all. Which will I click? I’ll go for the drama and emotion, please. Most of us would. We like using our imaginations.

And hang onto that organ donor card you just picked up.  I’ve a feeling it’s going to come in handy.